Lessons from the movies – Minerva Creative
Skip to content

Lessons from the movies 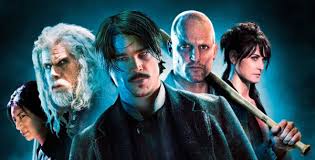 It’s safe to say I’m something of a film buff. Whenever I have a few free hours, I’ll happily settle down and tune in to a movie, looking for that period of escapism cinema and movies provide.

On one such evening recently, I found myself watching the 2010 offering from Guy Moshe, Bunraku. Something of a commercial failure – it currently has a less than flattering rating on review aggregator, Rotten Tomatoes – it gave me a strong reminder about how, as writers and creatives, we can take inspiration from anywhere and learn valuable lessons from other people’s work.

Taking a look at some of the reviews online, the biggest criticism of Bunraku came for the actual story. High praise was reserved for the visceral charm of the film, with its theatrical use of shifting backdrops and comic book-style aesthetics applauded from all corners. And, take my word for it, Bunraku offered a visual appeal that actively sought to be different. Such directorial ambition can only be commended.

But I digress. The fact criticism of the story was so prominent in reviews highlights a fundamental issue that all too common: the tendency to place style over substance. If you don’t have a message to send, what you produce will be nothing but a hollow – albeit pretty – vessel.

That’s not to say, of course, that style should be ignored. Presentation plays a huge part in both attracting attention and retaining interest. Without the correct packaging, the best story can go unnoticed, the best songs unheard, and the best products shelved. But while we may be a fickle species, we are one of great intellect.

Keeping to the movie theme, there are countless instances of style and substance combining to communicate an artistic statement. While Bunraku lacked any characters with which viewers could truly relate or empathise, and the storyline was somewhat disjointed and devoid of suspense, others have tackled a similar premise and been able to establish a relationship between audience and protagonists, all through keeping focussed on the story.

Take, for example, Memento. Like Bunraku, this movie was driven by a desire for revenge. The main difference in story substance, however, was that Memento had focus and intrigue. The direction and non-linear presentation of the story had a style with few peers, singling it out among a crowd, yet it was the connection to the characters that stirred emotions. Yes, they had unsavoury character traits, but we empathised with them in their plight, and joined them on a journey.

Great content should make you, as the audience, feel engaged; Bunraku, regrettably, failed on this point. There’s no reason why your content should. While the medium for your content may change, the underlying principle is that the story – and the message – you’re trying to convey should take priority at all times.

Focus first on the message you want to convey, then turn your attention to the presentation. Following this formula, you will soon be preparing rich, engaging content that connects with your audience.

Steps For Success: Article Marketing Tips And Tricks
May 5, 2021

Recent posts
Get social
Follow us on social media.

Get started with our partnership programme